You are here: Home / Testimonial Tuesday / How to Lose Weight Without Exercise

Can you lose weight without exercise? Well of course you can, look at Kevin Pedeaux! Without exercise, he lost 65 pounds in 3 months on the Paleo Diet. 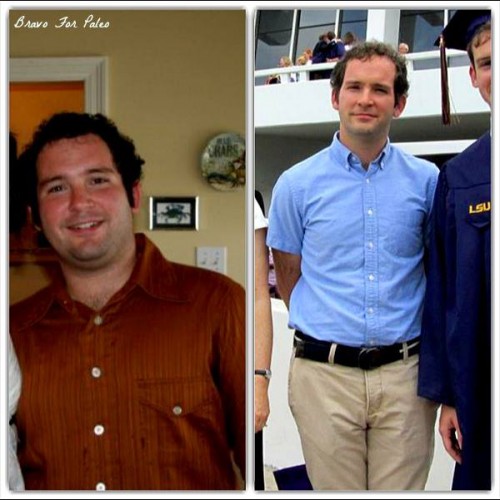 There will be a time in your life when you will think about your own health and well-being. The reasons will be deeply personal to you. Maybe it will be a major life milestone, maybe it will be an illness of a family member, or yourself. Whenever the moment comes, take advantage of it to muster up the will to make changes. There are lots of “healthy” things to do out there, but the real solution is getting back to the basics.

For me, it was a life milestone. When I turned 29 I decided that by 30 I would be in the best shape of my life. I had done every low fat diet there was. But one thing I had never tried was to give up sugar. So I did, in all of its forms. At that time I weighed 218 pounds. That is a lot for my 5’7 height.  I don’t know what level of obese that put me in. I did not ever want to know. I knew it was bad.

After giving up sugar for 40 days (which, by the way, I did as a Lenten sacrifice) I dropped 5 pounds. During this time I noticed something very interesting. I craved carbs. I ate more bread, French fries, potatoes, and chips than I ever had before. I would kill a French bread loaf in a sitting with some olive oil. I didn’t know a whole lot then, but I figured that was my body replacing my energy need.

Also during this time I was fat averse. Like everyone else I was indoctrinated to believe that fat made you fat. So I would get smoothies, ate cereal with skim milk for breakfast every day, and ate veggie sandwiches whenever possible. I was trying to lose fat after all. But come to find out my thinking was way wrong. And so is yours probably.

I sell coffee out at the Covington Farmer’s Market every Saturday morning. Out there I met Clint Bravo. I got to talking to him about my giving up sweets, and that I was discouraged by the results. I was ready to just start eating cookies again. For me, at the time, only five pounds down, cookies were worth that. He told me about the Paleo diet and how I was so close giving up sugars and that I should give it a try. He went in to the whole 30 day challenge and told me what books to read.

I read Robb Wolfe’s book The Paleo Solution. I watched the BBC special The Men Who Made Us Fat. I learned that even though we have successfully, as a society reduced fat intake, we are fatter than ever.

I cut grain out first and the results were immediate and dramatic. It was then that I read and learned about other things in the “Paleo” diet and did those too. As the results became more and more apparent, the more I wanted to learn about all the fake foods that are in our food supply.

I dropped 65 pounds in a little over 3 months. Those kinds of results are worth not eating bread. Bread doesn’t even really have a taste after all! Everyone in my life was talking about it. I became somewhat of a poster child for the “Paleo” diet.

While I think the whole “Paleo” thing is a fun way to talk about this lifestyle change, I think people get too caught up on what is paleo and what is not. For me, I just think about what the food is and what it is going to do to my body. For example, I ask, is this a sugar? Then it’s going to tell my body to store fat and my body will burn the sugar as fuel. Is it fat? Then it is going to kick my body into ketosis and burn fat. Is it protein? Then my body is going to use it as the building blocks for me.

The next thing for me was to learn how to cook. Everything pretty much in the grocery store is just stuff that resembles food, it’s not real. I started to get all my food from the Farmer’s Market. I then had to learn how to cook. I watched a ton of Alton Brown’s Good Eats episodes and learned the proper way to prepare food, and the science behind food.

Most people lack this skill and end up in the fast food drive thru. It is super easy to throw a breakfast together with eggs and bacon. If I have the time, you have the time. Don’t buy salad dressing. It is made out of junk oil. They are making it to sell and they are making it as cheap as they can. Make your own with olive oil.  You run on the food you eat, and you, physically are, the food you eat. Learn what it is. Make it. It tastes better and is good for you. It’s a win win.

I learned what real food was. I then learned how to prepare it. I changed every single thing I was used to eating. Today my meals are more enjoyable, and now as I move closer to my 30th birthday, I’m healthier than I ever have been.  I hope you too can find the will to make a change in your life and be healthier and happier.

I recently joined a health club. I used to work out in college and at other points of my working career. I would do tons of cardio because, after all, that burned fat. But, in my paleo readings, I found out this is not totally the case. I read that the energy drain only makes you want to carb up. So now I’m very interested in what just weight resistance training, with limited cardio, will do to my new slimmer body. I’ll have to report back my findings.

Want to be the next Testimonial on my blog? Send me your story at bravoforpaleo@gmail.com, and I may feature you!